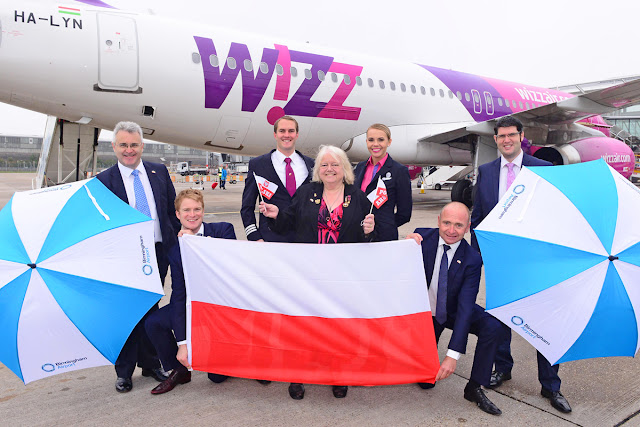 Wizz Air, the largest low cost airline in Central and Eastern Europe, became the newest airline to serve
Birmingham Airport today, Monday 15 September 2015, when it operated its inaugural Airbus A320 flight
from Warsaw, Poland, arriving at 0930 with 147 passengers on board. The Hungarian airline will also
serve Birmingham to Budapest, Hungary, from Tuesday 15 September 2015

Mr Kehoe said, "It is fantastic to welcome another new airline to Birmingham; our seventh this year. Both
Warsaw and Budapest are popular tourist destinations that have not been served from Birmingham for some
time so we are extremely pleased to be able to offer our customers even more choice and thank Wizz Air for
recognising the Midlands as a new market opportunity"

These two new routes each operate twice a week, with Warsaw operating each Monday and Friday and
Budapest each Tuesday and Saturday. Flights are available to book via wizzair.com from £15.49 each way

Councillor Fran Oborski MBE, said "With such a large Polish Community living in the Midlands, this new
Warsaw service will be welcomed by many who need greater connectivity to visit friends and family. Warsaw
is also a stunning city with varied architecture and thriving nightlife and music scene so I am certain that
the route will also be popular with Midlanders wanting to explore Poland’s fascinating capital city"

Tamara Mshvenieradze, Corporate Communications Manager at Wizz Air, added, "We are thrilled to be
celebrating our very first flights from Warsaw and Budapest to Birmingham. Birmingham is becoming
our eighth UK airport with two WIZZ routes that connect the West Midlands with two of the largest
capitals of Central and Eastern Europe and we look forward to a fruitful partnership with Birmingham
Airport as well as to seeing many happy passengers on board"