Ryanair launch Birmingham Airport base - and announce another 9 new routes!! 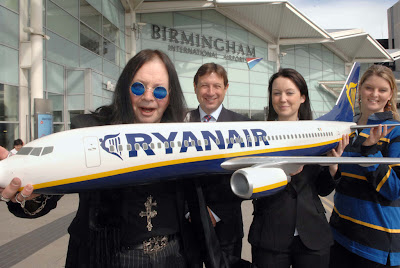 An Ozzy Osbourne look alike was on hand to launch the new Ryanair base with Peter Vella,
BHX's Business Development Director and Ryanair's Bridget Dowling and a member of their crew
Ryanair (FR), Europe’s largest low fares airline today,
Tuesday 17 June 2008, started its 25th base in Birmingham.
Ryanair also announced today that it will launch 9 new routes
to, Alicante, Derry, Fuerteventura, Katowice, Kaunas, Krakow,
Palma, Malaga and Murcia in October 2008
.
Celebrating Ryanair’s 25th base in Birmingham today, Ryanair’s
Bridget Dowling said: "There’s a double celebration at Birmingham
International Airport this week. We’re celebrating the arrival of our
first based aircraft here and we’re also announcing a further 9 new
routes which go on sale today. With 32 low fare routes announced
from Birmingham to date, people of the West Midlands no longer
have to suffer BA high fares or their high fuel surcharges
.
By 2012 , Ryanair’s will have 10 aircraft based in Birmingham,
which will deliver 5M passengers p. a. sustaining 5,000 jobs. This
will equate to £400 M visitor spend for the West Midlands. While
other airlines, like BA, are busy increasing fares and fuel surcharges,
Ryanair is guaranteeing the lowest fares and no fuel surcharges
. 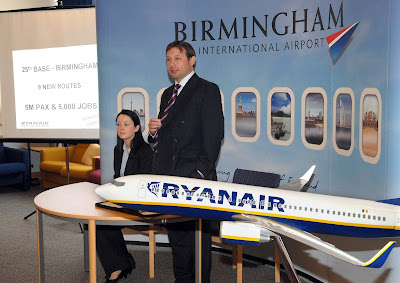 Peter Vella, Birmingham Airport's Business Development Director,
said: "We are delighted to be officially unveiling Birmingham Airport
as Ryanair's 25th base as well as welcoming the announcement of
these further nine scheduled routes from the airport. These new
services will offer passengers travelling from their local airport even
greater choice and flexibility, allowing them to travel from within
their region - whether that be for leisure or business"
. 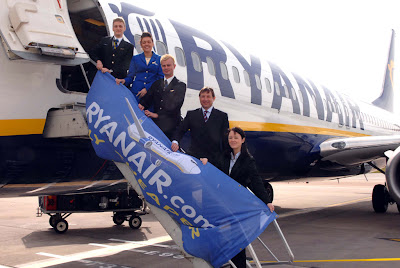 Peter Vella, Business Development Director of Birmingham Airport
and Bridget Dowling of Ryanair welcome the crew of the first flight
. 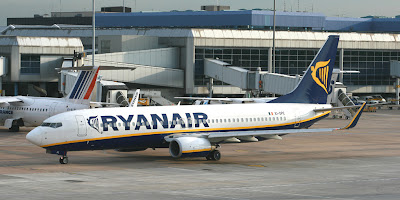 The first Ryanair Boeing 737-8AS to be based at BHX
- EI-DPE - departs on their first service to Dinard
.

Ryanair will now be serving 32 destinations
from Birmingham Airport -