VLM Airlines today, Monday 5 October 2015, launched a direct service from Birmingham
Airport to the thriving commercial and tourist centre of Antwerp in Belgium

The inaugural VLM flight was greeted with a water arch salute whilst VIP passengers were
greeted by The Belgium Ambassador to the United Kingdom, His Excellence Guy Trouveroy

H.E. Guy Trouveroy showed further support for the new service during an exchange of gifts
between Antwerp-based goldsmith, Wim Meeussen, and Birmingham-based jewellery designer,
Alice Stewart. The gifts represent the strong business synergies between these two cities in
industries including jewellery, fashion, automotive and chemicals 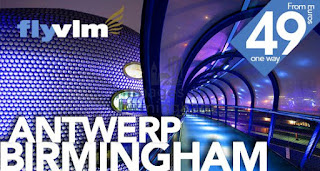 Steve Blair, Chief Operating Officer of VLM Airlines, says: "This new route not only serves
many businesses in the area, but is also ideal for travellers looking for a city break. Antwerp
is a magnificent place, home to one of Europe’s oldest and richest ports, with a bold and
diverse arts, fashion and culinary scene. A short train ride takes you to other popular
Belgian cities including Bruges, Ghent and Brussels"

William Pearson, Aviation Development Director of Birmingham Airport, commented: "This
new route to Antwerp is great news for the Birmingham catchment area; providing a fast,
practical connection to one of the most creative and cosmopolitan cities in Europe. We are
delighted to welcome H. E. Guy Trouveroy to Birmingham Airport for the first time to help
inaugurate this valuable new service"

Flights between Birmingham and Antwerp will operate three times weekly on Mondays,
Wednesdays and Fridays, with one-way fares starting from £39. VLM Airlines also provides
scheduled services from Birmingham to Waterford, Ireland, and onto Geneva via Antwerp
www.flyvlm.com