Birmingham Airport has officially marked the start of its runway extension development, which will see
the existing runway length increase to 3,003 metres and give aircraft unlimited range from the Midlands

The first phase of the project that is now under way is the A45 Transport Corridor Improvement Scheme
that will divert and improve the A45 Coventry Road between Damson Parkway and M42 Junction 6
The second phase will see the existing runway extended by 405 metres. This will enable aircraft to
take off from Birmingham with more fuel and fly direct to destinations currently out of reach, such
as China and the Far East, South America, South Africa and the West Coast of the USA


The development, which is being carried out by VolkerFitzpatrick Colas, is planned to be completed
in early 2014 and will generate spare long haul capacity in the region and help to take cars off the
road, saving thousands of unnecessary surface journeys each year

Paul Kehoe, Birmingham Airport’s CEO, explained, "The strong economic profile of the Midlands means
that businesses are crying out for direct connectivity from their local airport so it makes no sense that
3.3 million passengers from the West Midlands last year flew from airports in the South East, adding
congestion on the roads and at Heathrow, which is already 99.2% full"

"We have plenty of spare capacity at Birmingham now. Our passenger numbers could double from the
current nine million a year to eighteen million today, and the runway extension will allow us to increase
beyond thirty six million in future years"


With the runway extension opening up so many new long-haul route opportunities from Birmingham,
the Airport is actively talking to existing and new airlines to explore new markets and routes from the
Midlands. A new team of route development experts and a trade sales team have been employed by
the company to ensure that the Airport is represented globally at key trade events and meetings, and
it is working with local brands such as MG Motors and JLR to help develop relationships with key
overseas markets
The runway extension phase of the project will be wholly funded by the Airport Company at a cost of
£33 million. In addition, the Airport is making a further investment of £13 million for the construction
of a new Air Traffic Control tower and radar system, which will be operational in early 2013, plus
£9 million on resurfacing the entire runway

A dedicated website about the runway extension scheme is available at - 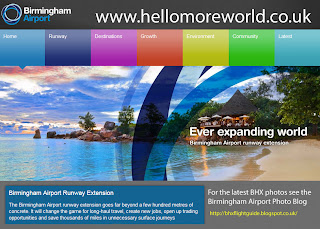