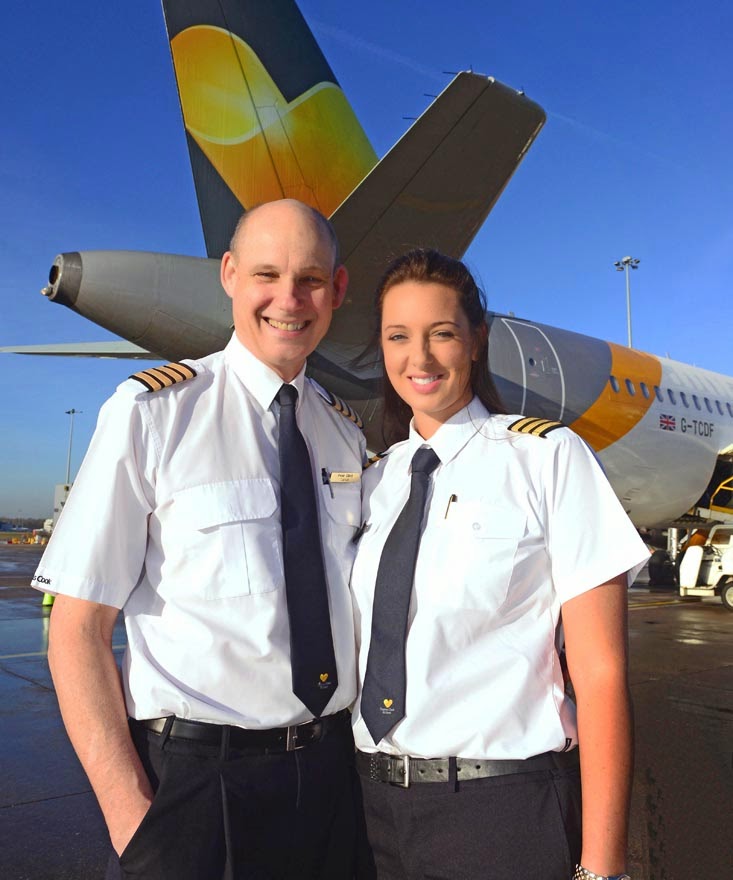 Last December, Thomas Cook Airlines welcomed the first of its new Airbus A321 aircraft
to be based at Birmingham Airport, and today, Friday 6 February 2015, another first takes
off from the airport – on board the same aircraft

Taking control on the flight deck of the A321 and flying holidaymakers from Birmingham
to Tenerife, was Thomas Cook Airlines’ first ever Father-and-Daughter flight crew

Captain Peter Elliott, one of the airlines’ most senior pilots, and his daughter, Senior First
Officer Laura Elliott, who recently returned to the airline, flew together for first time on
board the new aircraft

Speaking about this remarkable coincidence, SFO Laura Elliott said, "It’s pure chance that
we’ve been rostered on the same flight – I’ve recently come back to Thomas Cook Airlines
and with my Dad moving over to fly the same type of aircraft as me, we were hoping it
would happen one day.  We’re both very proud and we’re really happy to be sharing this
with the airport, our colleagues on board and our customers flying with us"

With 15,500 hours of flying and a pilot trainer for 25 years, Captain Elliott will take command
of the aircraft having moved from operating Boeing to Airbus aircraft ahead of Thomas Cook
Airlines bringing more A321 to Birmingham in 2015.  Alongside him, SFO Elliott joined Thomas
Cook Airlines as a cadet in 2009 and has acquired over 2,500 hours on Airbus type aircraft

Over the last few months, Thomas Cook Airlines has added six brand new Airbus A321 aircraft
to its UK fleet, and this is set to continue in 2015 with three further deliveries from Airbus as
part of the 25 aircraft being delivered to the Thomas Cook Group Airlines by 2016

With the airlines new fleet based at airports across the UK , Birmingham Airport is featuring
the new aircraft in the airlines new Sunny Heart livery.  This follows the news in July last year
that the airline would base four Airbus aircraft at Birmingham in Summer 2015, replacing the
outgoing Boeing 757 fleet - this summer the airline will offer 47,000 more flight seats and
holidays to customers in the Midlands