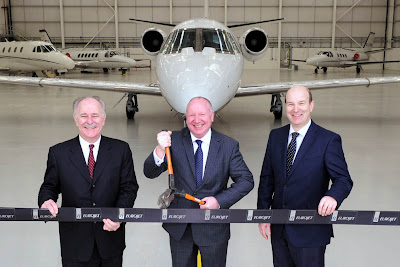 At the official opening of Eurojet Aviation’s new business aviation centre
are (from left): President of Avfuel Craig Sincock; Eurojet Managing Director
Graeme Campbell; Will Heynes, Development Director at Birmingham Airport
.
Eurojet Aviation, one of the UK’s leading Aircraft Management,
Charter and Maintenance companies, has successfully opened
its major new £5 million business aviation centre at Birmingham
Airport. The operation has also received approval from Cessna
Aircraft Company to become an Authorized Citation Service Facility
.
In addition to the Service Facility, the 41,000 sq ft building also
includes a full service FBO, commercial operations centre and
aircraft sales suite
.
Eurojet’s Managing Director, Graeme Campbell, said: "Our
objective for the Eurojet Business Aviation Centre at Birmingham
was simple - to create one of the finest private aviation handling
and maintenance facilities in Europe. With the tremendous support
of Birmingham Airport, Cessna and our other service partners, we
are confident that we have achieved this"
.
"As one of the longest-established private aviation companies
in the UK, we pride ourselves on delivering the highest service
standards with the utmost professionalism. Joining the network
of Citation Service Facilities is further evidence of this and we
look forward to further enhancing our long standing relationship
with Cessna in the future"
.
Concluding, he said: “With the forthcoming London Olympics
only a matter of weeks away, we are confident that this new
world-class facility, located at such a centrally located 24 hour
airport with exceptional road and rail links to London, provides
yet another compelling reason for operators and their clients
to consider Birmingham as a very viable option when travelling
to the capital this summer"
. 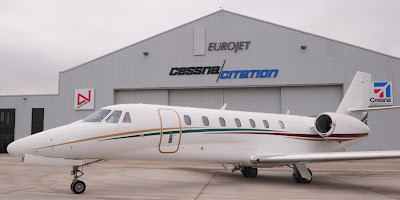 "We are happy to have Eurojet as part of the Cessna Authorized
Citation Service Facility network," said Kriya Shortt, vice president
sales Europe, Middle East and Africa. "Their support in the UK will
be a great benefit and competitive advantage for our customers
in that region"
.
In addition to the luxurious VIP passenger lounges the new FBO
offers extensive facilities dedicated to meet the needs of aircrew.
The complex includes a crew lounge, crew kitchen, private studies,
flight planning room, shower facilities, and a unique "snooze room"
with individual softly lit ‘dens’. Complimentary Wi-fi connectivity
is also available in all areas
.
Will Heynes, Development Director at Birmingham Airport,
commenting on the new partnership said: "Here at Birmingham
Airport we are always looking at ways to appeal to all markets
and this is shown with the opening of the new Eurojet facility.
General Aviation is an area that we are actively promoting and
with Eurojet as a partner we are sure this new venture will be
a fantastic addition to the Airport’s portfolio"
.
The newly opened FBO will also join the Avfuel branded
affiliate FBO network. The move means Eurojet and its
ground-handling teams will have a greatly enhanced fuel
supply offering for its private aviation customers, including
a dedicated fuel truck on hand to enable quick and convenient
turnarounds. Avfuel have a presence in over 2,000 locations
worldwide and are recognised as the market leader in their
sector. Eurojet was the company’s first European affiliate
.
President of Avfuel Craig Sincock said that Avfuel Corporation
is pleased to work with Eurojet Aviation as the company’s
branded fuel and services provider at Birmingham Airport.
"As Avfuel continues its international expansion, our company
strives to bring convenience, value and visibility to its partners.
We are honoured to be acquainted with such a well-regarded
company and its FBOs, and we look forward to working together
to meet and exceed the needs of customers,” he said
.
For more, visit the Eurojet Aviation website at -
www.eurojet.eu.com
.